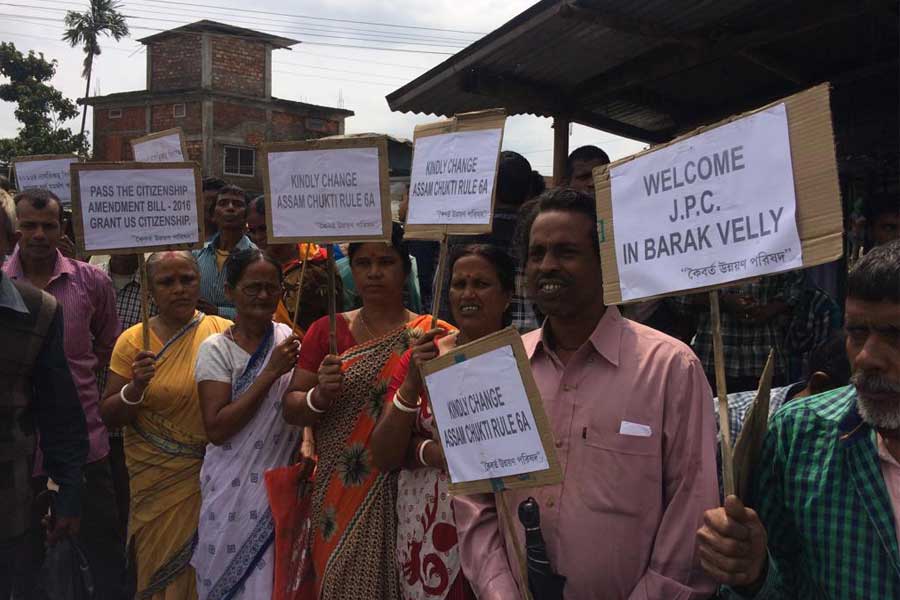 Citizenship Amendment bill: A shot in the arm for Congress in the North East?

Priyanka Gandhi’s roadshow in Silchar for sitting MP Sushmita Dev last Sunday marked a new innings for the Indian National Congress (INC) in the North East. Gandhi landed in the epicentre of the Barak valley, which has been embroiled in tensions over the controversial citizenship amendment bill (CAB) that proposes to include non-Muslim migrants as citizens.

Unlike other parts of Assam, the dominant Bengali-speaking Hindus here are in favour of the bill (and by virtue the Bharatiya Janata Party) since a majority risk exclusion from the National Register of Citizens (NRC) to identify illegal migration post 24 March, 1971. The NRC, which is in the process of being updated under the watch of the Supreme Court of India, is expected to be completed by 31 July this year.

While INC has gone out on every limb against the bill, Dev has taken a moderate stand declaring all those whose names appear in the 2014 voter list as ‘citizens’. The contradictory stand is not limited to the Congress alone.  Asom Gana Parishad (AGP), which earlier walked out of the government alliance in protest of CAB, is now back in alliance with the BJP.

Of late, many regional parties that traditionally enjoyed a stronghold like AGP, All India United Democratic Front (AIUDF), People’s Party of Arunachal (PPA) and Naga People’s Front (NPF) have devolved to a weak opposition or a non-entity in their states. The re-alliance with BJP has left AGP internally divided between senior leader and former CM Prafulla Mahanta and party president Atul Bora. With no wins from the 2014 general elections, AGP’s chances in the three seats look to be further plummeting this time with their vote share expected to take a further hit.

AIUDF, which fought 10 seats in the last general elections, are down to contesting in 3 seats this time ostensibly to consolidate the secular votes. Like in 2016 assembly elections, Congress declined to form a pre-poll alliance on account of the public perception created by the opposition of Ajmal likely being appointed Deputy Chief Minister under a Congress led government.

“We’re having serious differences with BJP on the Citizenship Amendment bill becoming an act in the parliament”, said Kaling Jerang, General Secretary of People’s Party of Arunachal. In 2016, PPA legislators including Chief Minister Pema Khandu defected to the BJP following a long-winded political turmoil in the state.

“As alliance partners, we should be respecting each other but BJP kept insisting that PPA MLAs should join their party”, he told The Kochi Post. Observers say the party should win 2-3 assembly seats in Arunachal Pradesh, which simultaneously conducted polls for the Parliamentary and legislative seats on 11 April.

What coincided with this devolution is the increasing foothold of right wing organisations like the Rashtriya Swayamsevak Sangh (RSS) in the region. Three days before the first phase of polling, when most of the constituencies voted, a Muslim ‘rice hotel’ owner in Assam was beaten by a mob for allegedly selling beef and was forced to eat pork.

Both national parties are in a close fight in states like Assam, Tripura, Manipur, Arunachal Pradesh and Nagaland, where sentiments are decidedly against the bill. However, BJP clearly has an advantage firstly on account of ruling the capital given that the North Eastern states have normally voted the same party in the Centre and state.

Secondly, its alliance with nine regional parties remains seemingly intact, despite tensions caused by the bill, even as most of them are contesting independently. Striking while the iron is hot, Congress seized the opportunity to form pre-poll alliances with regional parties and is hoping to capitalize on the anger left in the wake of the citizenship bill.

A window to win new friends

Once the undisputed ruling party in the region, Congress is playing catch-up with the BJP today. As evident from party president Rahul Gandhi’s rallies in Assam, Manipur and Nagaland, the party has been treating the CAB as a unifying issue and promised to scrap it, if voted to power.

In Tripura, they joined forces with the Indigenous Nationalist Party of Twipra (INPT) and National Conference of Tripura. Recently, several members from the Indigenous People’s Front of Twipra (IPFT) defected to Congress. INPT President Bijoy Kymar Hrangkhawl told The Kochi Post that the party was earlier scattered but things started looking up after Pradyot Debbarman was made state president.

“The BJP came to power on the promise of delivering a separate state of Twipraland. Now the IPFT leaders in the assembly hardly broach the subject”, he said. Kumar says that Rahul Gandhi has promised the creation of ‘Twipra Territorial Council’, besides scrapping CAB.

But would the Congress be risking upsetting the Bengali Hindu majority in the state?

First time candidate Pragya Kumari Debbarman, a descendant of the royal family of Maharaja Bir Bikram Kishore Debbarman, said the alliance wasn’t against Bengalis. “While most people coming from Bangladesh in Tripura are Bengali Hindus, the land and rights of the indigenous Bengali Hindus here is also under threat”, she said. Pragya is standing from the Tripura East seat (ST reserved), where polling was postponed to 23 April after a wave of violence between political party members.

Congress has chosen to go it alone in Assam and Manipur, where they are a strong opposition in the assembly. However, CAB is an issue mostly limited to the valley (inner seat in Manipur), which has been wracked with several protests against the bill and a violent state crackdown .The threat from outsiders has been a long standing issue in the valley because of which the assembly passed the Manipur People’s Bill as a proxy to ILP in the state.

The valley is a three-way fight between Congress candidate O Nabakishore Singh, RK Ranjan from the BJP and Dr. Moirangthem Nara of the Communist Party of India (CPI). According to observers on the ground, while the BJP has the advantage of being in government, opposition candidates like Dr. Nara are finding great receptivity on the CAB issue. Nara has been a close runner-up in the past four times he contested from the seat that the CPI has won twice before.

“Elections in Manipur are hardly ever a reflection of the real politics here”, said Johnson Elongbam, President of a civil society body called the United Committee of Manipur. However, he said, this time even alliance partners like National People’s Party openly challenged the BJP leadership, evidenced from CM Biren Singh calling Meghalaya CM Conrad Sangma, a ‘Shillong kid’.

GK Zhimomi of the Nagaland Pradesh Congress Committee, which has entered into a pre-poll alliance with Naga People’s Front (main opposition in state assembly), said that CAB will render the inner line permit (ILP) system ineffectual, wherever it applies. “CAB brought NPF and Congress together and so, this isn’t going to be a run-of-the-mill election”, he told The Kochi Post.

Is NEDA in trouble?

The North-East Democratic Alliance (NEDA) of BJP and other regional parties in the region was formed following the BJP-AGP-BPF alliance winning a thumping majority in Assam in 2016. Among these regional outfits, National People’s Party (NPP), founded by the Late PA Sangma, is the only regional party that has gained traction even as the BJP grew exponentially in the region in the last 3 years. Besides its home turf in Meghalaya, NPP is part of the government in Manipur, Arunachal Pradesh and Nagaland. Contesting in 11 Lok Sabha seats in the region and 31 of the 60 seats in the Arunachal assembly, NPP is projecting itself as a pan-regional party which can emerge as a strong alternative to national parties.

In the lead up to the nominations for the assembly polls in Arunachal, several key BJP legislators defected to Sangma’s party after they were denied tickets. A senior state Congress leader told this reporter that they had an understanding with NPP. However, Sangma would neither confirm nor denied the possibility.

“We can only decide once the results are out and we sit with the MLAs”, he told The Kochi Post. Sangma was among the few NEDA leaders that rushed to New Delhi when the citizenship amendment bill was up for passage in the upper house of the Parliament. However, he threatened to exit NEDA only if the bill was passed.

Mutchu Mithi, a sitting legislator in the Arunachal assembly, said there was no such understanding with either the BJP or the Congress. “We will decide according to the alliance that forms the government in the Centre, the verdict of Arunachalees and the decision of Conrad Sangma”, he told The Kochi Post.

But NEDA architect and BJP minister, Himanta Biswa Sarma told Hindustan Times that they held a discussion with Conrad about the seats either party was contesting to keep the Congress out. “In Assam, on many seats they are not fielding candidates. So, in places where there is a chance of the Congress winning if we were to contest against each other, we have decided not to”, Sarma said.

Congress leaders are positing this general election as an Armageddon for the BJP-led NEDA. The ticket denial to NEDA architect and BJP minister, Himanta Biswa Sarma, has added a huge chink to the Congress narrative of the party being driven by RSS.

Commenting on Sarma getting a ‘tweet not a ticket’, a senior politician from a ruling party in the NEDA told The Kochi Post, on the condition of anonymity, that many regional parties and leaders were not happy with the BJP leadership. “Kiren Rijiju himself told me that the two Brahmins (Ram Madhav and Sarma) are the real Chowkidars of the North East. They will never give a tribal that kind of power”, said the leader close to Rijiju, the only North East MP in the Union Cabinet.

Meanwhile, Sarma has been telling local and national media that CAB is a ‘non-issue’ among voters in the North East, which might be true as ground reports show. However, the insertion of this line in the BJP manifesto, ‘We reiterate our commitment to protect the linguistic, cultural and social identity of the people of North East’ indicates the party has taken cognizance of people’s sentiments on the issue. 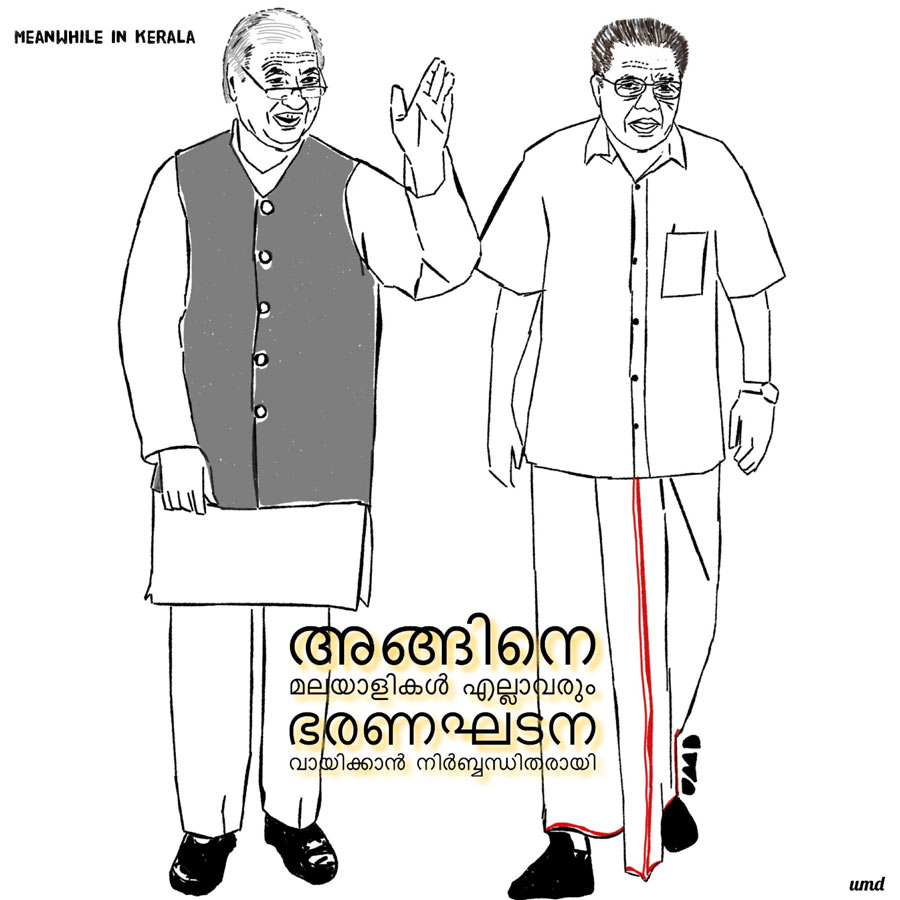